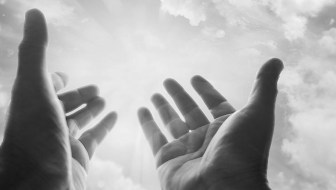 “Receiving Christ” means different things to different people. While some people interpret it as a mere show of sympathy to the christian cause, the Bible demands a high standard. An encounter Jesus had with three men indicates that God will not accept a second place in a person’s life.

As they were walking along the road, a man said to him, “I will follow you wherever you go.”

Jesus replied, “Foxes have dens and birds have nests, but the Son of Man has no place to lay his head.”

But he replied, “Lord, first let me go and bury my father.”

Jesus said to him, “Let the dead bury their own dead, but you go and proclaim the kingdom of God.”

Still another said, “I will follow you, Lord; but first let me go back and say goodbye to my family.”

Jesus replied, “No one who puts a hand to the plow and looks back is fit for service in the kingdom of God.”

The total person is involved in receiving Christ Jesus. For any yielding to Christ to be genuine, there must necessarily be an intellectual commitment. This is a mental acceptance of Jesus Christ as saviour and Lord, but that alone is not enough. Even the devil knows that truth about Christ and shudders in his presence.

Thou believest that there is one God; thou doest well: the devils also believe, and tremble.
Does it not appear contradictory to you how the demons could give all the beautiful credentials to Christ and still function as opponents.

Saying, Let us alone; what have we to do with thee, thou Jesus of Nazareth? art thou come to destroy

us? I know thee who thou art, the Holy One of God.
Such could be the strange behaviour of people who are only committed intellectually to Christ.

Some religious people move a step further by getting emotionally committed as well. They sing, dance and in long prayers filled with appellations, pay lip service to God. However, the strength of emotions is not dependable enough to survive the storms that often come to test for genuine belief. Persecution or worldly attractions have an effective way of exercising mastery over human emotions that were once employed in the service of the Lord but were not rooted in the stronger force of will. Emotional commitment alone is a form of “spiritual infatuation”.

Large crowds were traveling with Jesus, and turning to them he said:

“Suppose one of you wants to build a tower. Won’t you first sit down and estimate the cost to see if you have enough money to complete it?

For if you lay the foundation and are not able to finish it, everyone who sees it will ridicule you, saying, ‘This person began to build and wasn’t able to finish.’

“Or suppose a king is about to go to war against another king. Won’t he first sit down and consider whether he is able with ten thousand men to oppose the one coming against him with twenty thousand? If he is not able, he will send a delegation while the other is still a long way off and will ask for terms of peace. In the same way, those of you who do not give up everything you have cannot be my disciples.

We are to count the cost of our decision because, it is not always rosey and nice as preached by men of God. There will also be hard and dark moment of rejection and persecution. All these adds up for a balanced growth in God.

Receiving Christ does does not mean “absence of problems and storms”. There are times that God will not allow the problems, other times He will allow it in to strengthen your faith; He takes away the problem when we call on Him, and at times let’s the hang around but calms you and strengthens you to overcome it.

Receiving Christ must involve the commitment of one’s will. It similar to a marriage covenant. God actually refers to His children as those who are married to him.

Turn, O backsliding children, saith the LORD; for I am married unto you: and I will take you one of a city, and two of a family, and I will bring you to Zion:
Thus, all who truly receive Christ do not merely go through the motions of inviting Christ into their hearts as the popular phrase goes but they really have Christ in control of their lives.